Home » News » Deafverse is Getting Noticed 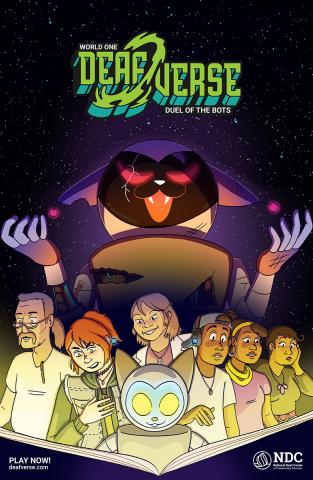 Deafverse is making an impact and people are starting to notice. Currently, more than 2,500 players are learning how to navigate challenging situations, advocate for themselves, and know their rights. When beta players are included, that number jumps to over 5,000.

Most recently, the choose-your-own-adventure game for deaf teens was featured in Alcalde, the official publication of the Texas Exes — the University of Texas’s alumni organization.

“Video games have come a long way since the ’80s,” the article begins. “… But in all that time, there has never been an American Sign Language accessible video game. Until now.”

It has also been featured in The Daily Moth, KXAN and The Daily Texan.

“The player begins the game escaping from a mysterious organization who is trying to learn about the Deafverse — which is a collection of ancient, magical comic books,” said KXAN’s Alyssa Goard. “Next, the player enters these comic books, both trying to stop a rogue bot and also making choices in scenarios similar to those deaf teens would have to make in real life.”

That translation into real life is key for the game designers.

“I can become more comfortable with answering certain questions or solving certain situations or feel comfortable taking risks,” Justin Perez, the game’s narrator, told The Daily Moth. “With these new skills, we can go back to the real world where it can be tough, but you’d have the tools to recover and respond by seeking out resources, resolutions, some kind of help and numerous other resources.”

Gaming Coordinator Kent Turner expanded on that thought in his interview with The Daily Texan.

“The game teaches deaf people to know their rights,” he said. “They have a right to an interpreter (and) different accommodations in school. Some deaf students don’t know about these (accommodations), so we developed this game for deaf students to learn how to manage their lives.”

Though the game is targeted toward deaf teens, it is accessible to people with a wide range of abilities, including those who do not know American Sign Language. The game was made possible by support from the U.S. Department of Education’s Office of Special Education Programs.

December 2, 2022
NDC’s work with colleges and training programs across the country is unveiling an alarming trend. Disability services professionals in postsecondary environments are sharing that the national shortage of...
Read the Article 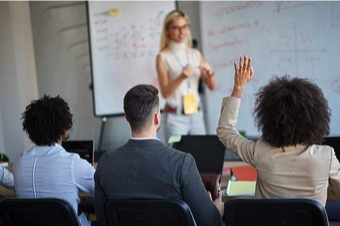 November 10, 2022
Understanding root causes is an important step for moving beyond temporary solutions to address the underlying factors of educational inequities for deaf people. Through the...
Read the Article

This work is licensed under a Creative Commons International License.

Fill out this form to get help from the NDC team.  Can’t see the form below? Click here to contact the NDC team.

XWe use cookies on our website to give you the most relevant experience by remembering your preferences and repeat visits. By clicking “Accept All”, you consent to the use of ALL the cookies. However, you may visit "Cookie Settings" to provide a controlled consent.Read MoreCookie SettingsReject AllAccept
Manage consent

This website uses cookies to improve your experience while you navigate through the website. Out of these, the cookies that are categorized as necessary are stored on your browser as they are essential for the working of basic functionalities of the website. We also use third-party cookies that help us analyze and understand how you use this website. These cookies will be stored in your browser only with your consent. You also have the option to opt-out of these cookies. But opting out of some of these cookies may affect your browsing experience.
Necessary Always Enabled
Necessary cookies are absolutely essential for the website to function properly. These cookies ensure basic functionalities and security features of the website, anonymously.
Functional
Functional cookies help to perform certain functionalities like sharing the content of the website on social media platforms, collect feedbacks, and other third-party features.
Performance
Performance cookies are used to understand and analyze the key performance indexes of the website which helps in delivering a better user experience for the visitors.
Analytics
Analytical cookies are used to understand how visitors interact with the website. These cookies help provide information on metrics the number of visitors, bounce rate, traffic source, etc.
Advertisement
Advertisement cookies are used to provide visitors with relevant ads and marketing campaigns. These cookies track visitors across websites and collect information to provide customized ads.
Others
Other uncategorized cookies are those that are being analyzed and have not been classified into a category as yet.
Save & Accept